I ’m a scientist, I know (sort of) what makes clouds and shapes in the sky but since my parents have died I regularly see them up there.

Mum died first after a long protracted distressing illness that wasn ’t cancer so the care she was given seemed grudging, as if she was taking the nurses and doctors away from more important cases. She had a series of wonderful live in carers, carers in the truest sense of the word, putting the professionals to shame. She died at home peacefully, without drama, waiting just long enough until dad and I got home from his outpatient appointment to take her last breath with us at either side of her bed. In death she looked like her mother, a resemblance I had never noticed in life.

A few days after her funeral I was being driven somewhere, I can ’t remember where, or why. I was staring at the sky out of the passenger window, probably trying not to cry, watching the clouds drift past, forming and re forming into shapes, and then, all of a sudden, there was mum. Her face very clear, in profile, she was reclining, lying on a pillow of clouds, looking peaceful and comfortable. Resting. It gave me such comfort to see her there. I ’d always known she ’d go to heaven, good people do, kind, giving people and she was all of those things. I just didn ’t expect to see her there. I watched her until she was consumed by another larger, darker cloud as if someone was drawing the curtains. I said good night (to myself, how could anyone else understand).

Over the coming weeks I frequently saw her, sometimes clearer than others but oddly enough, always lying down. She had been such a busy person until her last illness, always looking after others, I was glad that she was finally allowed to lie in peace, no one disturbing her to dress her or do dressings or other uncomfortable procedures.

Sometimes there were animals near her, once a teddy clearly outlined and then one day her form had arms outstretched and there was very clearly a baby being held up, her face towards him. She had found Graham our brother who died as a baby. There was very little movement in the sky that day, the clouds stayed the same for some time.

One day mum looked as though she was reading a book and a little patch of sunlight appeared at her left shoulder, just as if she ’d switched on a reading lamp.

Another day a rainbow appeared at her feet.

I was doing a lot of driving over the months after mum died. Dad was fading but being brave and calm as he always had been. The sky didn ’t always reveal mum to me, sometimes it was a wall of cloud with no form to it but other times I saw mum on several stages of the journey. Her face clear, usually in profile, her body cushiony, not always complete, sometimes in pieces, colourless, wispy, ethereal but there.

I was driving to work when I got the call at seven in the morning to say that dad was taking his last breath. After the phone call (I was still driving up the A14) the sky in front of me seemed to clear. The sky above the horizon was a clear blue and then as sometimes happens in East Anglia the cloud formed a straight line parallel with the flat horizon. Right in front of me were two vapour trails forming an inverted V ending in the layer of cloud. The one on the right was clearing and so slightly jagged for all the world like steps. I knew that was the way that dad would follow to meet mum.

It took a bit longer for me to see dad up there but then one day, I was looking up to see if mum was around, and there he was. Very clear, it was his nose that gave him away but what surprised me was that he was smoking, under his nose was what looked like a cigarette with a tiny smoke trail issuing from its end. He hadn ’t smoked for forty years before his death but obviously in heaven he wanted to be relaxing with a cigarette (or was it a cigar? He had loved a cigar at Christmas, making the room smell so rich, luxurious and decadent).

Dad was always smoking when I saw him in the clouds, mum was always lying down. I didn ’t see Graham again separately but perhaps he had become part of her again.

I see them less often now, it somehow doesn ’t matter because I know they are there. I wish I could have drawn them. I wouldn ’t have wanted to take a photograph, it seems too intrusive and contrived. I don ’t need tangible proof.

Coming to the end of writing this, sitting in my study looking out at the Norfolk sky, hundreds of geese flew noisily over like a giant dot to dot puzzle – I ’m sure mum will enjoy doing that one, I can just see her. 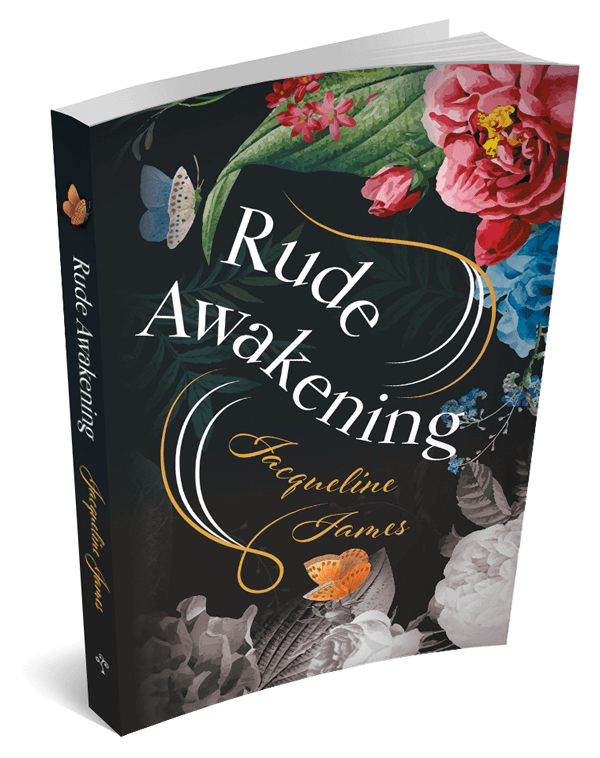 Jacqueline's debut novel, Rude Awakening, is a thought-provoking and touching tale of loss, evolving friendship and self discovery.